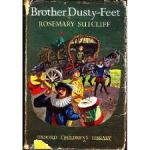 Rosemary Sutcliff‘s Bother Dusty Feet is coming to radio in the UK and on the internet. Along with his faithful dog Argos, eleven-year-old orphan Hugh Copplestone decides to leave his Aunt and Uncle’s house after one beating too many, and marches off to Oxford to seek his fortune and the New Learning. When he meets a group of strolling players along the way, Hugh joins them and becomes part of their acting troupe. He walks “with his legs straight and his shoulders back as the Players taught him”. Or as The Radio Times says:

Set in the days of the first Queen Elizabeth, Rosemary Sutcliff’s children’s novel, written in 1952, has more than a touch of ‘lashings of ginger beer’ and Wizard of Oz innocence about it. Young Hugh, an orphan, is bound for the dreaming spires of Oxford, with only his beloved dog and the stars for company, when he meets a kindly band of travelling  players, and joins them on a series of adventures and derring-do. Shaun McKenna’s adaptation is full of fanciful myths, legends and encounters with historical heroes. The whole family will be eager to find out if young Hugh finds his rainbow, somewhere along the dusty roads of southern England.

To discover what the New Learning was

In the history of ideas the New Learning in Europe is a term for Renaissance humanism, developed in the later fifteenth century. Newly retrieved classical texts sparked philological study of a refined and classical Latin style in prose and poetry.

The term came to refer to other trends, one being the new formulation of the relationship between the Church and the individual arising from the Protestant Revolution. Contemporaries noticed this. Thomas Howard, 3rd Duke of Norfolk, lamented “It was merry in England afore the new learning came up”, in relation to reading the Bible.

An earlier ‘new learning’ had a similar cause, two centuries earlier. In that case it was new texts of Aristotle that were discovered, with a major impact on scholasticism. A later phase of the New Learning of the Renaissance concerned the beginnings of modern scientific thought. Here Francis Bacon is pointed to as an important reference point and catalyst.(From Wikipedia)