Rosemary Sutcliff’s Arthurian novel, Sword at Sunset, was top of the UK bestseller lists in 1963, the year it was first published. Fifty or so years ago there was no internet; cuttings services collected press clippings and sent them on to publishers, the agent and the writer. 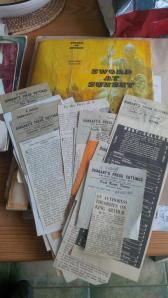 Christina Hardyment’s life of Thomas Malory was  published by HarperCollins. In 2012 she reviewed a 50th anniversary re-publication of Rosemary Sutcliff’s bestseller Sword at Sunset—an Arthurian era novel—which was, in 1963 when it was first published, “firmly announced to be for adults, and given the (for their time) graphic and violent scenes of sex and slaughter, it deserved to be.”

Rosemary Sutcliff is most famed for The Eagle of the Ninth, but there was much more to her than that. In the 1950s, historically-minded children found her books a magic carpet into the past. I began with Brother Dustyfeet (1952) and The Armourer’s House (1951), and never looked back an insatiable interest in history has remained the backbone of my life.

Sword at Sunset is, unusually for Rosemary Sutcliff, is a story told in the first person. Artos becomes the High King of Britain but his fate has been written ever since he was drugged and seduced by his half-sister Ygerna. Their child Medraut becomes a boy filled with hate by his mother.

…(Sutcliff) drew as much upon the archaeology of Celtic and Saxon Britain as on the ancient legends in Malory’s Morte D’Arthur and Guest’s Mabinogion. She also admired T. H. White’s four idiosyncratic Arthurian novels (now known as The Once and Future King), and the intensity with which she inhabits the mind of her hero Artos has echoes of White’s extraordinary characterisation of Arthur. ‘I have never written a book that was so possessive,’ Sutcliff said in an interview in 1986. ‘It was almost like having the story fed through me’. Writing as a man possessed her; afterwards, ‘I had great difficulty getting back into a woman’s skin.’

Her narrative amazes in the sheer vigour of its visualisation and its sure sense of purpose. Lanterns, sunsets, fires, the aurora borealis and other manifestations of light recur: Artos is holding back the coming of the dark long enough for there to be hope that the civilised light that was Rome will survive to be adopted by its conquerors. Battles are heart-stopping, tense and unpredictable, winter weather effects are frostbite-inducing, and Artos’s travels across Britain are confidently mapped …

No-one would dream from reading Sword at Sunset and Sutcliff’s other action-packed, fast-moving tales of Roman and Celtic warriors that she remained severely crippled all her life with the juvenile arthritis she contracted as a very small child. Once one is aware of this, a recurring theme of incapacitating wounds is better understood; as is the important role she gives to the hounds and horses in which she found such consolation.

When Rosemary Sutcliff’s Arthurian historical novel Sword at Sunset was first published in hardback by Hodder & Stoughton in 1963 it cost 21 shillings (£1.05). Using a simple purchasing power calculation—multiplying £1.05 by the percentage increase in the retail prices index (RPI)  from 1963 to 2012—this equates to £18.62 in 2012. In 2012 a hardback version was reprinted by Atlantic Books, with recommended retail price of £16.99. So, in one sense, a new hardback edition of Sword at Sunset ‘cost less’ this time round!

On at http://www.bedlamtheatre.co.uk in Edinburgh

Oyster in New York claims that it offers “unlimited access to over 100,000 books for $9.95 a month, with new titles added all the time.” Of Rosemary Sutcliff’s Sword at Sunset they post: This brilliant Arthurian epic cuts through the mists of pagan, early Christian, and medieval splendors that have gathered about the subject and tells […]