Author Joanne Harris ( @Joannechocolat on Twitter) this morning tweeted a lovely story (#storytime) involving a rocking-horse. It put me in mind of Rosemary Sutcliff’s horse Troubador – made for her by a rocking-horse maker in Sussex – which prances still in our hall. And of Rosemary’s story for children, The Roundabout Horse. 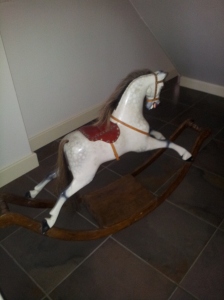 The full story, extracted from the stream of Tweets this morning, follows:

There is a story the bees used to tell, which makes it hard to disbelieve.

Once there was a little girl, who very much wanted a rocking-horse. But only boys could play with such things, and so she would sit and play with her dolls and dream of wooden horses. Her brother had a hobby-horse and a wooden lance to go with it, and sometimes she would stroke its mane, but she never rode it.

Time passed. The girl grew up. She married a man who kept horses. But she was always so busy looking after the children that she never learnt to ride. Instead, she would look out of the window at the horses in the fields, and wonder what it would feel like to simply ride away.

Her husband died. Her children grew up. The woman, now grown old, was alone. Her children sold the horses and gave her the money for her old age. “It’s time to think of youself,” they said. And then they asked her to babysit for all her little grandchildren, so that she had no more time than she’d ever had before. But in her dreams, the old woman rode horses of every colour; with flowing manes & gleaming eyes & nostrils flaring in the wind.

Time passed. Her grandchildren grew up. She grew too frail to be useful. People started to whisper that her wits were wandering; that she had entered a second childhood. But the old woman had a secret. Every morning, she would walk to the wood-carver’s house, and talk to him. Sometimes she gave him money. She did this every day for a year, so that finally all her children and grandchildren and great-grandchildren became suspicious. They followed her to the wood-carvers house, and found out the old woman’s secret. She had ordered him to make a magnificent rocking-horse. It was the king of rocking-horses: carved from a massive piece of oak; with eyes that flashed green fire and a mane like sea-foam. But neither they nor the wood-carver knew the person for whom she intended it.

Every child and grandchild and great-grandchild assumed that the horse was a gift for them. Family members who had not paid her a visit in years now became regular callers. The old woman received them with a twinkle in her eye, but never mentioned the rocking-horse. Christmas approached. The old woman’s family eagerly awaited news of the gift.

Then, on Christmas Eve, the wood-carver announced that the horse was finally complete. The old woman went out in the snow to the woodcarver’s house, to make the final payment. She looked at the horse. It was perfect. She stroked its mane with a trembling hand. To whom shall I deliver it?” asked the woodcarver at last. “No-one,” said the old woman, and smiled. “This rocking-horse belongs to ME.” And at that, she climbed up onto the horse’s back, held the reins in both hands and began to ride.

She rode right out of the woodcarver’s house and out into the snowy night, with the wind in her hair and the stars in her eyes.

Some people say they’ve seen her, galloping across the sky.