A history GCSE-teaching site ( johndclare.net)  quotes this extract from Rosemary Sutcliff’s The Armourer’s House (unfortunately mis-stating the book’s title as  ‘The Armourer’s Apprentice’ at one point!). He invites learners to compare the ‘picture’  she paints of Tudor times with that suggested by a woodcut that “showed the things that made the Tudor street an unhealthy place in which to live”.

He says of The Armourer’s House that it is  “a children’s book written in the 1980s about Tamsyn, a lttle girl visiting Tudor London.” Actually, Tamsyn was not just ‘visiting’: Following the death of her grandmother, Tamsyn is sent to grow up with her uncle, a famous armourer, and his family in London, in the time of King Henry the Eight (VIIIth), in the period when he was married to one of his many wives – Anne Boleyn. Tamsyn’s dream of setting sail with her seafaring uncle was dashed.  For she would have much preferred to stay in Devon, watching the uncle’s ships. She was homesick until she discovered that a cousin, Piers, shared her feeling for the sea, and they became close friends.

Mr Clare could not be much more wrong about the date (he cites as 1980s), either. The Armourer’s House was one of the first books written by Rosemary Sutcliff, published first in 1951! Anyway, as Rosemary puts it:

In those days cities were not at all like they are now.  They were small and compact and cosy.  The houses were cuddled close together inside their city walls, with the towers of their cathedrals standing over them to keep them safe from harm.  London was like that.  As you came towards it, up the Strand from Westminster or over the meadows from Hampstead, you could see the towers and spires and steep roofs of the City rising above its protecting walls as gay as flowers in a flower-pot; and when you had passed through the gates (there were eight fine gates to London Town), the streets were narrow and crooked and very dirty, but bright with swinging shop-signs and hurrying crowds.  And the shops under the brilliant signs were as gay as fairground booths, with broidered gloves and silver hand-mirrors, jewels to hang in ladies’ ears, baskets of plaited rushes, coifs of bone lace, wooden cradles hung with little golden bells for wealthy babies.  Other shops sold the rare and lovely things from overseas that were still new to the English people – Venetian goblets as fine as soap bubbles, pale eastern silks, strange spices for rich men’s tables, and musk in little flasks for people to make themselves smell nice.  But if you wanted ordinary things, such as food or preserving pans, you went to Cheapside or some other market; and if you wanted herbs you went to the herb market, which was really one of the loveliest places in London, because most flowers and green things counted as herbs in those days.

The street of the Dolphin House was one of the nicest streets in London.  It was a very busy street, full of a great coming and going that went on all the daylight hours, so that there was always something to watch from the windows … Brown-clad monks, and church carvers and candle-makers, merchants and yet more merchants, and jewellers and silversmiths, and sailors everywhere – more sailors every day, it seemed to Tamsyn.  All these came and went along the street, and sometimes a great lord would ride by on a tall horse, or a lady with winged sleeves of golden gauze and servants running ahead to clear the way lather.  Strolling players often passed that way, too, on their way from Ludgate to the Fountain Tavern, where they acted their plays; and Morris Dancers, or a performing bear led by a little boy, or a man with a cadge of hawks for sale …

Oh, it was a very exciting street, and as the weeks went by, Tamsyn began to like it very much indeed. 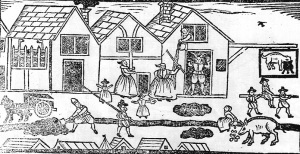