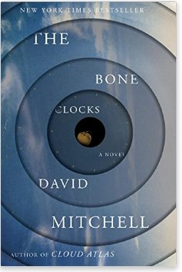 David Mitchell’s The Bone Clocks was nominated for the 2014 Man Booker Prize. Holly Sykes, the heroine, appears in some form in each of its six segments, which begin in 1984 and stretch to 2034. The sixth and final portion imagines a near future in which an ‘Endarkment’ has reset the world into barbaric times.

In an interview for an online magazine about books, arts, and culture—The Millions— David Mitchell was asked whether any specific sources inspired his vision of how the world might look in twenty years time. He spoke first of a “really good book published in the 1950s called The Death of Grass where a killer virus doesn’t kill us, humans…but gets the crops we eat”. The second source of inspiration was Rosemary Sutcliff’s The Eagle of the Ninth series, which is “the book that Holly is reading to the kids in the last section”.

Rosemary Sutcliff … was an English, wheelchair-bound classicist in the 1950s who wrote about the Romans leaving Britain and the collapse of Roman civilization. The series focuses on the power vacuums a collapse of that magnitude leaves, and how the innocents always end up having to pay more then the soldiers. Those books are colossal. They are fantastic. In the third book of the trilogy, The Lantern Bearers, the best of the three, there is a scene where the Roman ships leave the shores of Britain for the last time, and they know it’s the last time. What are they leaving behind? What’s going to happen to these people? That’s what was at the forefront of my mind—really how our world will look to my daughter as she grows—as I was writing that last section.